If you don’t know who Vassos Alexander is, you probably don’t watch/listen to much sport or you don’t listen to the Chris Evans Radio 2 Breakfast Show on which Vassos Alexander is the “Sports guy”. Alexander is also a runner. In fact, I don’t think he ever stops running — and I suspect in recent years he has never knowingly walked anywhere since he could possibily run instead. It hasn’t always been like this though. Alexander didn’t start running until he was well into his thirties and since he noticed “an alarming tube of fat about an inch wide, wrapped in a yellow golf shirt and flopping over my belt.” It’s fair to say he didn’t just start running; he gradually became a runner and, over time, became increasingly obsessed with running. This book as the subtitle denotes is his “26.2 tales of a runners obsession” with running.

There are three parts to each of the 26.2 chapters. The first is Alexander’s commentary on each of the 26.2 miles he ran as part of an Iron man triathlon. The second has stories or anecdotes from the many runs and races he has taken a part in from that first time he set foot in a gym high on red bull and began a torturous 20 minutes on a tread mill. The third part is given over to another runner, Paula Radcliffe. Paula Radcliffe, the Brownlee brothers, Jenson Button, Colin Jackson, and many other less-known runners describe their relationship with running. As I write this I realize it sounds like it could be a confusing read. It isn’t.

If you like running, this is an easy to read book. The chapters are short and each have a separate part complementing the other. There is much humor in its pages; you’ll start to believe that you too could become an ultra marathon runner (I only believed it for about 5 seconds but I did momentarily consider the possibility). However, reading through the literal torture Alexander puts himself through to complete the iron man triathlon soon put a stop to that (!). 26.2 miles was at the end of a 2 1/2 mile swim and a 112 mile cycle ride. At mile 8 of his run he says:

“with every step, the only thing crossing my mind is how much I’m dreading the next step, and the 50 000 after that”

While this book clearly documents the trials and tribulations of running, it also documents the pure pleasure that can be gained from slipping on a pair of trainers and setting off. Alexander does a lot of just “setting off”. He regularly sets off for a little run and returns 20 miles later. Needless to say, he does not go anywhere without running shoes. One of the delights of this book is his descriptions of the places he has run in and the description of the people he has run with. From Paris to Koh Yao Noh island in Thailand and everywhere else in between, with his cousin (also named Vassos) he has run marathons around Europe; with his children, he participates in his local Park Run most Saturdays. The final section of the book is written by his children:

“I sometimes dreaded going out running with my dad and Matthew on Saturday mornings. But then I realised that it doesn’t matter who’s quicker or who holds the family 5km record. I want to run fast and I want to do my best but I’m running my own race” Emily (11)

“We’ve done some great runs together, dad and me. Once we ran a 10km race together. It was really hilly and a bit tough, but I was the only kid running and I felt very proud at the finish. As my dad told me after he finished an ultra marathon, every run is a chance to learn little things about myself, and a chance o let myself shine” Matthew (9)

I often run around the areas of London where Alexander runs; and I have to admit, since reading this book, I’ve keeping an eye out in case I should spot him. I suspect it’s unlikely. I’d probably only see the back of him as he sped past me or barely notice him as he whizzed towards me. It’s easy to see why Alexander has inspired the majority of the breakfast show team to take up running. His enthusiasm and love of running and life leaps off the page, and his childlike joy in running is infectious. I can only imagine what this must be like in real life. He’s also rather humble. He describes himself as an unexceptional runner. Having read this book I’d say he’s really rather exceptional. 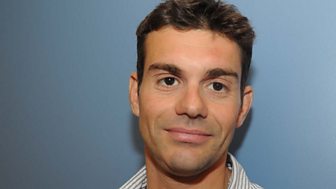 Vassos Alexander is a British sports reporter, presenter and author. He is an ambassador for the young person’s charity Skillforce and is best known as the sports presenter on The Chris Evans Breakfast Show on BBC Radio 2. Alexander has also worked on BBC Radio 5 Live as a presenter, reporter and commentator and on BBC television, BT Sport and Eurosport and has reported on six Olympic Games for the BBC and currently commentates on tennis, golf, diving and darts. Alexander has completed several ultra marathons and Ironman triathlons and has a sub-3 hour marathon personal best. He lives in Barnes, with his wife, Caroline, and three children, Emily, Matthew and Mary. | Buy Don’t Stop me Now: 26.2 Tales of a Runner’s Obsession | New: Keep On Running… And Running… And Running On March 8, 2018 – Preorder

Review By Angela Vincent Of Changing Pages | Book & Flowers Image From Changing Pages | The Black Lion is a humble interdisciplinary journal that values your voice. Visit the submissions page to learn more about submitting to the Journal’s sections or to The Wire’s Dream Magazine. | Copyright Policy