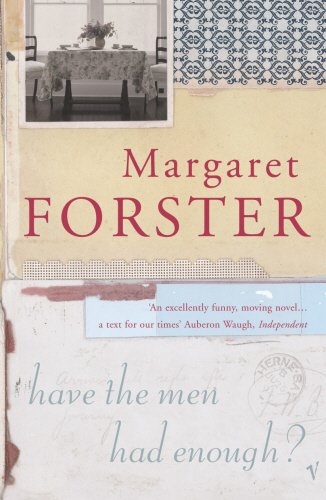 Buy Have The Men Had Enough?

Grandma is a tough Scottish woman. She has had a hard life bringing up a daughter and two sons as a single parent after the early death of her husband. She is fiercely outspoken and is at her happiest when drinking sugary tea and eating biscuits. As dementia took hold and her ability to cope alone deteriorated, her family brought her down from Scotland to live with them in London. Or perhaps more precisely, to live with her daughter. Her daughter works as a nurse; and when she is working, much of the caring responsibilities for Grandma fall on her daughter-in-law and her granddaughter. This is the story of Grandmas deterioration and the toll it takes on the family as each member, in their own, way seeks to fix the problem. It is told from the perspective of Grandma’s daughter-in-law, Jenny, Jenny’s daughter, and Grandma’s granddaughter, Hannah.

I am aware that I may be portraying this as a bleak tale of misery and ill health. This is a story about dementia and one woman’s demise as a result of it, so of course there is a bleakness — and there can’t really be a happy ending. However it is also very funny, very sharply observed.

Hannah’s relationship with Grandma is particularly touching; she clearly loves Grandma despite the frustrations and repetitive conversations, and Grandma’s cantankerous demeanor. She shows tenderness, patience, and compassion that is so often missing in other older members of the family. It is the conversations Hannah has with Grandma as she tried to make sense of Grandma’s particular interpretation of situations which made me laugh the most:

“Has she had her tea?

The wee lassie, she looks hungry.

It's only a picture Grandma.

Why not? I suppose they get hungry like anyone else.

You mind your mouth

You know it's a picture Grandma.

Stop waving. Why are you waving?

At the wee lassie. Has she had her tea?”

I loved Hannah’s character and the way Margaret Forster uses her teenage, simplistic understanding of life to address the big questions.

“Why don’t more people kill themselves when they get old? Why do relations not kill more old people? What’s the point of keeping old people alive anyway?”

So many issues are addressed in this novel. Gender inequality in the role of a caregiver is beautifully demonstrated. Grandma’s two sons are remotely involved. One has made the clear decision with what seems like a clear conscience not to be involved — the other funds her care, spending hundreds of pounds (or dollars) a week to ensure Grandma is cared for, but spends little time himself doing the actual caring. Even Hannah’s brother does little other than take Grandma to chiropody appointments — and yet, he feels fully entitled to speak out on how she should be cared for.

Again it is Hannah who sums this up clearly.

“What I think is this: I as mums says, we are all in this together then there has got to be a fairer sharing out of the labour. If Grandma finds the Male presence comforting, then give her more of it. If she gets more of it, she might get over her general fear of all men. Then the woman would be freer.”

The novel is such a clever study of dementia — the ebbs and flows of the illness itself. The progression from a woman who is mobile, continent and conversant — even if in an erratic way — to a woman who needs full time care; the periods of calm and stability to the swift progression of falls, incontinence, and full time care. All of this is dealt with sensitively but without being overly sentimental.

Margaret Forster (25 May 1938 – 8 February 2016) was an English novelist, biographer, memoirist, historian and literary critic. She is best known for her 1965 novel Georgy Girl, which was made into a successful film of the same name and inspired a hit song by The Seekers, as well as her 2003 novel Diary of an Ordinary Woman; her biographies of Daphne du Maurier and Elizabeth Barrett Browning; and her memoirs Hidden Lives and Precious Lives. // Wikipedia

Review & Header Image By Angela Vincent Of Changing Pages: Books, Words, Pictures | The Black Lion is a humble interdisciplinary journal that values your voice. For contribution opportunities, visit the Opportunities page; to learn more about submitting to the journal’s creative magazine, visit the The Wire’s Dream Magazine: Submit. | Copyright Policy