I am a long time lover of comics and more recently consumed by politics. I can’t stop reading the news, I’m on edge, I’ve ‘lost’ friends, family. But at the same time I haven’t felt this passionate about anything in a while.

On January 20th, 2017 the world changed in a big way when Donald J. Trump was inaugurated as the 45th President of the United States. Writers, singers, scientists, citizens and artists have started a movement. Pen America, recently released a piece called State of Emergency. Here I try to unpack there meanings and bring some context to the text. There are 8 separate comics; I recommend all of them but this week, I am only reviewing 4. | View All Conversations

Snowflake is not a recent term; and though now applied to liberals, specifically white liberals, the term was once used as a slur against anti-abolitionists. Robert Kirby illustrates his experience with the trending hash tag in his comic #Snowflake. Robert perfectly depicts what most of us probably felt on election night and in the subsequent weeks — that feeling like “Carrie-at-the-prom levels of rage”. Kirby mentions his middle-class bubble, “thanks for asking” and how the awful realization that our country really is full of racist *beep* hits hard. Kirby suggests that snowflakes have to continue our education, to “understand”. But more importantly, all of us Snowflakes MUST listen to and learn from leaders of color in the movement, call out hateful speech, and most importantly, act! There is more to being an ally then reading a book. 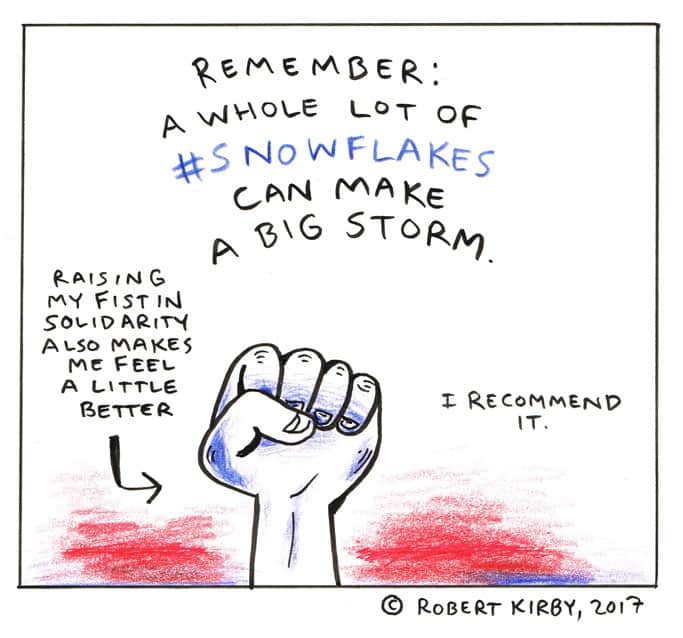 Robert Kirby is a cartoonist, editor, and reviewer living in Minneapolis. Among his books are Curbside Boys (Cleis Press, 2002), The Book of Boy Trouble (Green Candy Press, 2006), the Ignatz Award-winning anthology QU33R (Northwest Press, 2014), and his latest, What’s Your Sign, Girl? Cartoonists Talk About Their Sun Signs (Ninth Art Press, 2015). His reviews and features appear in The Comics Journal, Panel Patter, Rain Taxi, and other publications.

© 2017 Article by Rachel McGill Of Lvl41Rogue: Comic Books & News for TBL Journal | The Black Lion is a humble interdisciplinary journal that values your voice. Visit the submissions page to learn more about submitting to the Journal’s sections or to The Wire’s Dream Magazine. | Copyright Policy